by Cindy and Jeff Ritschel

St. Paul’s History is not only an unusual one, but also a beautiful tribute to those who have served her so loyally through the many years.

Prior to 1831, Lutherans living in Orwigsburg were affiliated with Zion’s (Red) Church, organized in 1755, the “Mother Church of Lutheranism north of the Blue Mountains.”

Then, in 1831, the Lutherans and Reformed people in the community united to form the “White Church” located at the corner of Tammany and Washington Streets.  After its dissolution in 1844, the Lutherans built a red brick church on North Warren Street (commonly called the Campbell Apartments) and adopted our present name, St. Paul’s.  This building was used by our congregation until 1884, when our present church was completed; it was then sold to the Methodist congregation. 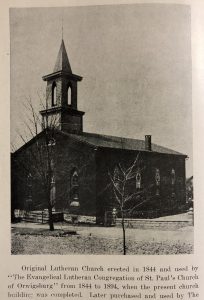 Only eleven pastors have served the congregation since 1873, a period of 146 years.

The Rev. I.N.S. Erb served our congregation until his death in 1888.  During this time the church building was renovated, the basement enlarged and remodeled, and a new organ was purchased.

The cornerstone for our present church was laid in 1892, dedicated June 2, 1895, during the pastorate of the Rev. Harvey Weller.  Our longest serving pastor, from 1889 until 1916, he later became the first full-time president of the Ministerium of Pennsylvania. 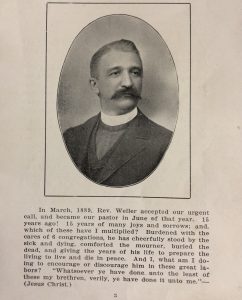 During the pastorate of The Rev. C. Elwood Huegel, 1937-1952, the 100th anniversary of the congregation was observed.  The auditorium (sic) was renovated, a new organ installed, the children’s division of the Sunday school (in the basement) and the social rooms remodeled at a cost of $10,000. 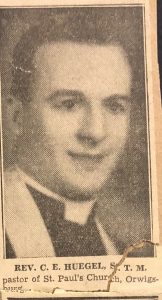 The Rev. William H. Marburger, 1952-1973, was responsible for many renovations. In 1953, the parsonage was renovated at a cost of $4,000, a new slate roof and copper-ridge roll was installed on the steeple at a cost of $3,000, and an illuminated cross as a memorial gift was mounted.  Carillonicbells, a memorial gift, were installed and dedicated in May 1953.  On January 16, 1955, our Congregation was happy to hold a mortgage-burning service celebrating the clearing of a $10,000 debt was held January 16, 1955.  Later that year the parsonage kitchen was remolded, and, in the same year, 1955, the Endowment Fund was started with an initial contribution of $2500 by Mr. John Reidler.  This Fund has continued to grow thanks to individual gifts and bequests.

From 1974 until 1979, the Rev. Donald W. Wert served our congregation and instituted many new programs.  These include our very successful Service Ministry, Meals-on-Wheels, the Adult Forum Sunday School, the Youth Group, and the services of a lector to assist in the service.

The Rev. Elmer H. Eiche served St. Paul’s from August 1980 until his death in October 1998.  An accomplished pianist, Pastor Eiche was instrumental in creating the Vespers Concert Series, the purchasing of Memorial Anthems, and the creation of our Handbell program.  Other innovations include:  the Wednesday Lenten soup suppers, a Tenebrae service on Good Friday, the Imposition of Ashes on Ash Wednesday, offering communion on the first and third Sundays, the use of the Lutheran Book of Worship and maroon Hymnal Supplement for liturgy and a freestanding altar for services.  He included children’s sermons, the Service of Lessons and Carols, Wednesday noon Advent services for the community, Easter breakfast for the congregation as well as other opportunities for members to socialize with each other through adult fellowship activities.  Under his pastorship we also installed a new organ, converted a Sunday school room into a parlor, computerized the office, created a private pastor’s office upstairs, and modernized the church phone system!  Pastor Eiche served during two anniversary celebrations, one of which included the burial of a time capsule and the making of two congregational quilts.

From late 1998 through mid-2000, the Rev. Norman J. Wilson served as our interim pastor.  During this time, the St. Paul’s Barber Shoppers formed, the Lay Eucharistic Ministry and Communion Assistant programs began, the steeple was refurbished, the Memorial Garden and ginkgo trees were planted, a ramp was constructed, and church carpeting was replaced.

The Rev. Dr. Joseph J. Scholtes, Jr., began his ministry at St. Paul’s in July, 2000.  His approach to parish ministry had been “to tell the story, splash the water, serve the meal, and get out of the way.”  That is, preach and teach, baptize, preside at Holy Communion, and then watch the wonderful ways the Holy Spirit moves the people of God to do ministry in Christ’s name.  Attempting to keep preaching and worship as lively as possible, he used a variety of preaching styles, told scripture from memory, invited the “young and young at heart” to join him in the chancel, wrote new texts for familiar hymn tunes, and introduced “Beany Baby Grace” who appeared the first Sunday of each month to remind the congregation that grace is “God’s love freely given."  During his pastorate the congregation moved to weekly celebration of Holy Communion, began using the Evangelical Lutheran Worship as our chief worship resource, and he moved Lenten midweek services to Reidler Hall.  He encouraged the congregation to deal with challenges and problems by talking together, considering solutions, and taking responsibility to work towards those solutions.  This leadership approach helped lead to a revived Youth Group and Post-Communion (pre-Confirmation) Sunday School class, a “Let’s Care!” task force, and a Deficit Reduction Committee.  But Pastor Scholtes was quick to point out, “All a pastor can do is attempt to get the ball rolling. It’s the people who get the work done.”  During his pastorate Pastor Scholtes said, “I have been privileged to see the people of God do remarkable things here at St. Paul's.  I am blessed to be among their enthusiasm, dedication, and caring.”  He retired in 2013.

The Rev. Lee A. Diefenderfer served St. Paul’s from 2014 to 2017, returning to St. Paul’s, his home church which had shaped his formative years.  Unlike most of his predecessors, Pastor Diefenderfer, or “PD” as he was commonly known, chose to reside in his own home rather than the parsonage.  The house consequently became a rental property during this time.  PD initiated Saturday evening services and invited all interested members to serve as communion assistants.  He led the many activities related to the 500th Anniversary of the Reformation and served as our primary contact during remediation of a major boiler problem that resulted in disruption of virtually all church related functions for an extended period.  Perhaps Pastor Diefenderfer’s greatest legacy was his calm guidance through some difficult personnel and financial crises that threatened to divide St. Paul’s.  He retired in November 2017.

The Rev. Michael T. Petresky was called in late 2018.  Prior to his family moving to Orwigsburg in spring of 2019, the parsonage required extensive renovations which were performed by a contractor in conjunction with many volunteers from St. Paul's.  During his first year Pastor Mike has introduced his own personality and style while preserving many of those traditions which have served so well for so long.  We look forward to hearing his beautiful singing voice and wonderful sermons in the years to come.  St. Paul’s officially turned 175 years old as an independent Lutheran congregation on Saturday, December 7, 2019.